The politician from Ireland about BTC – Ossian Smyth

A candidate from Green Party announced that he accepts btc donations to help his campaign in Dún Laoghaire elections. As he considers, that Bitcoin is the good opportunity to change the aspects of our lives and has the potential to do that. His major interest in the transparent money flow via government. Everybody can see his btc donation address here: https://www.blockchain.com/btc/address/1DCa4L6g9E2FYu9U8ZuHxk3Esr6RtjkWUK

We met the politician at the social night on Wednesday. The event was held in The Baggot. We interviewed him a little bit regarding the background of such a decision. 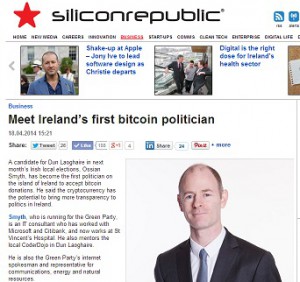 BTC is a decentralized digital coin, so why is it so important for politics?

If BTC undermines the political interests, then cryptos will be curtailed. So when your stocks of metal fall in price or business of payment processing suffer in case bitcoin gain popularity then people can lobby to forbidden btc.

Here we present the common actions taken by politicians that can affect and damage BTC development.

Politics can make bitcoin transactions taxable, as Ireland did so. That means that you have to pay income tax and declare it for any transaction. Still, it’s not known if the gains with bitcoin are taxed by Irish Revenue.

Check the exchange you trade on – if it’s illegal, all Bitcoin funds can be frozen and never returned to the owners.

Same is here if banks consider Bitcoin transfers as an illegal option like money laundering or so, then all bitcoins, people’s trading accounts will be blocked.

It’s crucial to understand that if someone wants to use BTC illegally, then all fair transactions will be discriminated by such people which lead to a stronger association with criminality.

As we know the US government restricted the foreign online casinos and betting rooms to accept citizens of the US. And most of them followed this. All that rejected the rules were punished by law on the American territory. For the developers of BTC and its foundation board, it crucial not to become an outlaw.

7 – What Can Politics do to help BTC growth?

My advice – choosing the candidate, you need to understand that your decisions make influence the future of technologies regulations.